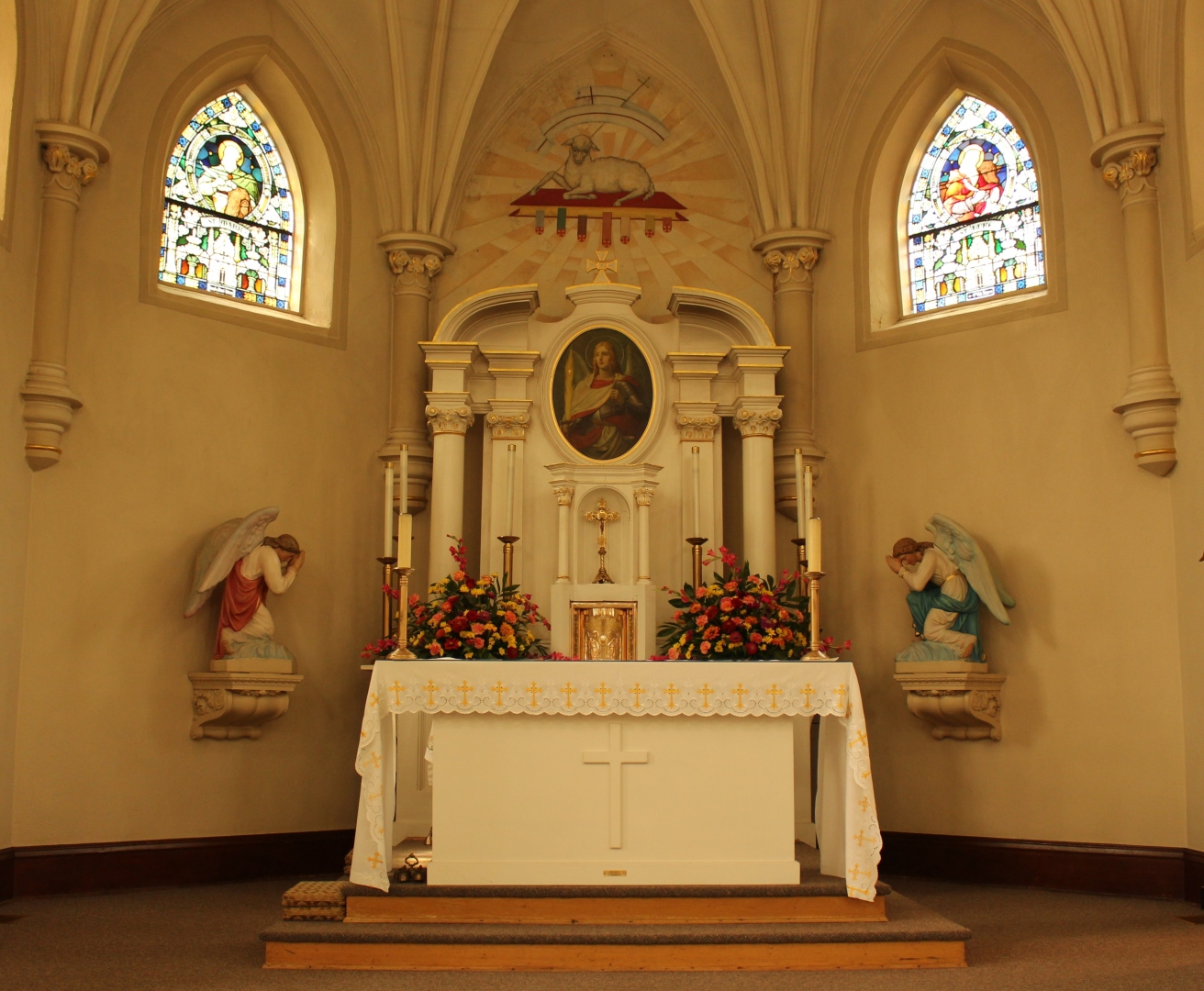 The cornerstone of the Church was laid in spring of 1916 but it wasn't until 1918 that the parish was financially able to finish the walls, roof and tower and begin attending Mass in the new building. There were no regular windows installed in anticipation of the purchase of stained glass windows featuring ecclesiastical art. Only canvas covered the window openings until the late 1920's.

In 1924 when the parish felt their financial condition was sufficient to proceed, representative of European church window firms arrived to submit samples of their artwork and the Bavarian firm of F. X. Zettler from Munich received the contract.

Father Alphonse and the members of the Board of Trustees selected the subjects (saints) for the windows. Each window opening was tagged with its subject's name and the congregation was invited to choose which window they would like to contribute to. By the end of the 1920's the windows were manufactured and shipped from Germany and installed. Father Albert described the beauty of the windows as follows, "It would take an artist to do justice to our windows. Even the laymen marvels at the variety of color and tints; that rich red, the golden hues, the tender green of foliage, as illuminated by the rising or setting sun. Masterpieces of art are the faces of the saints, delicately executed, life-like in appearance. There is nothing loud, worldly, or offensive but deeply imbued with a devotional spirit and high artistic value." The stained glass windows at Saint Michael's are a unique and classic example of "Munich-style" stained glass popular during the latter half of the 19th century and continuing throught the first part of the 20th century. The fine art of the Munich style stained glass creates detailed picture-like composition similar to the late Gothic paintings and Renaissance alters. The glass used in the Zettler windows is hand blown antique glass.

Over time the windows has turned into the Church into a museum of historical significance with the windows serving as priceless artwork.

In March 2017, it was discovered that the Saint Scholastica window had multiple bulges that could potentially lead to glass breakage. Other windows were also noted having problems with the Saint Gregory window being in the worst condition. When the stained glass windows were manufactured in the 1920's the life span was only 75-100 years because of the lead used in the construction breaks down over time. The lead used in current times is now made of a different composition and is projected to last over 150 years. An independent inspector and four companies with expertise were brought in and examined our windows and all agreed that it was time to begin restoration work.

After many years, the time had come to not only restore the windows to their original state but leave them in better condition. A contract was signed with Emmanuel Studios in  Nashville, Tennessee in 2020 to completely restore the Zettle Sainted Glass windows at a cost of $430,000. Work started in October 2020, the first two windows were taken out were Saint Scholastica and Saint Elizabeth. In September 2021 the first two windows were fully restored and reinstalled and two more windows, Saint Boniface and the Baptism of Jesus, were taken out.

The whole restoration project is expected to be completed in the next several years. Emmanuel Studios is an accredited member of the Stained Glass Association of America.

The legacy that the present generations leave St Michael's will be the restoration of our precious windows which should sustain the church for many years to come.

To contribute to this restoration project please label the donation as 'Window Restoration'. Donations may be made in memory of someone and/or designated to a particular window.